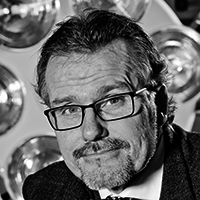 Lucien Engelen (1962) has worked since 2007 at the Radboud University Nijmegen Medical Centre as Head of the regional emergency healthcare network.

He also advises the Board in terms of changes in healthcare enhancing the participation of the patients and their informal care in their own disease, working towards raising the level of participation in Health(care), research and education.

He is founding Director of the Radboud REshape Center, that acts on the convergence of technology and patient empowerment. Creating breakthrough programs, foresights and products if industry lacks progression itself.

He was named one of the initial 150 world thought leaders and invited to blog on LinkedIn Today as part of the influencers program (500.000+ followers as of july 2014),